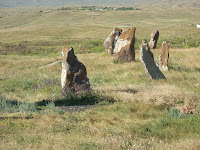 ­­­­­­It is situated 3 km north to the Sisian. It is a complex of hundreds of vertically fixed religious monuments/menhirs. The all stones of the monument are of basalt and on some of them there are hauls.
There are necropolis ''City of the Dead'' dated 3-1 millennium B.C and a great number of traces of buildings and tombs near the Megalith monument.
The monument reflects the outlook and the astronomical imagination of its constructors. Based on the worshiping and astronomical viewpoint it is an applicable structure. The holes opened on stones first of all have had a technical meaning and only later it got symbolic-worshiping and probably astronomical meaning.
The Zorats Qarer has been built in 3-2 millennium B.C. and is closely entreated to Megalith monuments.